I just finished reading Dale Russakoff’s book The Prize on the collapse of the Newark school reform effort.  Newark was supposed to be the  poster child for school reform.  Mark Zuckerberg of Facebook donated $100 million dollars.  Cory Booker, Newark’s mayor became a television celebrity.  Governor Christie was a staunch supporter until he wasn’t.  Cami Anderson was hired to lead the charge.  She left.

The book reads like an adventure story beginning with Booker and Christie trolling the streets of  Newark in the dead of night.

I thought The Prize would be about charter schools.  It really was not.   It is about…

END_OF_DOCUMENT_TOKEN_TO_BE_REPLACED

Senator’s Montford and Gaetz asked some hard questions of the Alpine testing company that did the FSA validity study.  I agree that the mismatch of questions with specific standards is an issue.  I agree that validity is relative; tests are not 100% valid for every purpose.  Alpine states this clearly in its report.

I keep wondering why no one has brought up the fact that independent ratings of the complexity of the math and ELA tests revealed a serious mismatch with ratings done by DOE staff.  The mismatches were systematic, so the math items were less complex than intended and the ELA items were more complex.  The DOE should have had these questions evaluated but did not have time, so they did it in house.  This problem can come home to roost when proficiency levels are created.

I posted about this earlier.  I object to the word ‘slightly’ that was used in the report.  Over one third of the items were affected.  This is not a ‘slight’ problem.  Here’s the data:

DOK ratings were slightly lower than intended in math because somewhat more items were intended to reflect level 2 but were rated level 1. Thirty-six percent of the math items were rated below the intended level.

DOK ratings were slightly higher expected in ELA because many were intended to reflect  level 3 but were rated at level 2.  Thirty seven percent of the ELA items were rated above the intended level.

The discussion was wide ranging.  Questions were raised about the validity of the new Florida Standards Assessment, the rationale for and impact of annual testing, the use and misuse of achievement test scores for teacher and school accountability.  Dr. Roberts spoke about the need for quality preschool educational programs rather than tests that do not help children learn.  He laughed and said: If you want to help a pig gain, you feed it.  You don’t just keep weighing it.  Children’s brains need to be nourished, not measured to make them expand.  You can watch the video here.

In this brief published by the National Educational Policy Center, Jennifer Rice expands on Horace Mann’s view of what it would take to provide equal opportunity in our schools.  She asks:  What is equal opportunity with respect to education and how to we measure it?

Her argument is expansive. It requires policy makers and the public to formalize policies that account for the social and economic role of schools in determining students’ life chances.  She argues that if we commit schools to providing equal opportunity, it will broaden the evaluation of schools from a narrow academic achievement focus.

Providing equity requires a whole community to participate.  Rice explains how.  I give an example of a school in Orlando that shows this concept at work.  It is startling!  If it works so well in one school, how can a community plan differently to help all schools?

END_OF_DOCUMENT_TOKEN_TO_BE_REPLACED 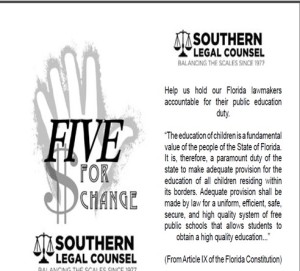 There are many ways to be heard.  Responding to the DOE webinar and survey is one.  Writing your legislators both at the state and national levels is another.  Showing up  at school board meetings can help.  In the end, we will also need the courts.

There is a lawsuit:  Citizens for Strong Schools that comes to trial in March.  The suit supports public schools based on Florida’s constitutional requirement for a unified, strong, efficient, high quality system.  Note the word ‘unified’.  The school reform movement advocates privatizing our schools by creating charters and tax credit scholarships to private schools.

Testing is the accountability strategy for school reform.

Southern Legal Counsel is the firm that has filed the Citizen’s for Strong Schools lawsuit.  They are operating pro bono.  If you can help them raise money to cover expenses, then go to their website.  You can donate there.  Just click the DONATE button.  Any amount can help.

The new FSA cut scores have been released.  There is a WEBINAR tomorrow about them.  I signed up.  You can too.  Go to:  FSA Cut Scores   You need to register.

There is a SURVEY  to complete for the DOE to give your feedback.  You do not have to watch to complete the survey.  The input survey is here.

Carol told me that in his application for Superintendent in Palm Beach County, Robert Avossa spoke of his passion for public education.  He did not suggest he would turn Palm Beach into a charter school district.  Now, this is exactly what he wants the Florida legislature to do.  Fulton District Schools in Georgia, where Avossa was Superintendent, became a charter district under his watch.  Carol says she has a wonderful blues CD by BB King performing at San Quentin prison.  He sings ” Nobody loves me but my mother , and she could be jiving me too”.
I called the Fulton District Schools and was told that “a charter district was not a district of charters”.  The district was exempt from state regulations governing public schools, but it managed the schools and hired the faculty.  It did not  turn schools over to charter management companies, and students attended their locally zoned schools.  We are looking closely at this distinction.  We should be wary, because Avossa is a Broad Academy graduate.  This is a hand picked group of school reformers, and Carol tells you more about them.
END_OF_DOCUMENT_TOKEN_TO_BE_REPLACED

AlterNet published another story on the origins of school choice in Florida.  The story begins with Jeb Bush’s term as governor.  What  may have been intended to dramatically improve schools only turned out to be dramatic in the number of reports of corruption and chaos.  The article ties together the power brokers and the growth of for-profit charter schools.

It is a money and politics tale.   You can read it here: How Jeb Bush’s Florida Plan School ‘Choice’ Created Industry Corruption and Chaos.  You will find reports about the League of Women Vote’s study including data from Sue Legg and Pat Hall (LWV Hillsborough).

The local Broward League interviewed the principal of Pinewood School.  Their story is one most districts must consider.  How do you balance student needs, financial support, and school choice in a diverse district.  School grades reflect the socio-economic backgrounds of students.  Remove a large group of higher income families, and a school’s grade goes down.  Create a magnet program in a low income school, the grade goes up.  Perhaps even more important, maintaining a reasonable balance of students from different backgrounds allows a culture of possibility and achievement to flourish.  Without a view into a larger world, schools get mired in defeat.

The League will continue to watch Pinewood in the hope that the district will not abandon it.  There is support coming for the school.

END_OF_DOCUMENT_TOKEN_TO_BE_REPLACED

Jeff Bryant has done it again.  In today’s AlterNet, he writes about How Jeb Bush’s Florida Plan for School Choice Created an Industry of Corruption and Chaos.  Bryant quotes Rosemarie Jensen, from United OptOut and Nan Rich, former State Senator whose views on charters have changed as they watched the consequences of school choice in Florida.  As early as two years after Governor Bush launched school choice, it  became clear that money, not improving education was the driving force in Florida.

Much of the profits in charter schools derive from real estate dealings.   Charter management companies have their own companies.  They build or purchase facilities and lease them to charter school boards, often at exorbitant rates.  Bryant summarizes reports of corruption and abuse that has ensued.  The case in Broward County quotes League studies of rapid expansion at the cost of traditional public education.

This is  a comprehensive article that underscores the problems associated with inadequate planning and oversight of charters.  The Senate Education Committee is planning hearings.  They need to hear from you.